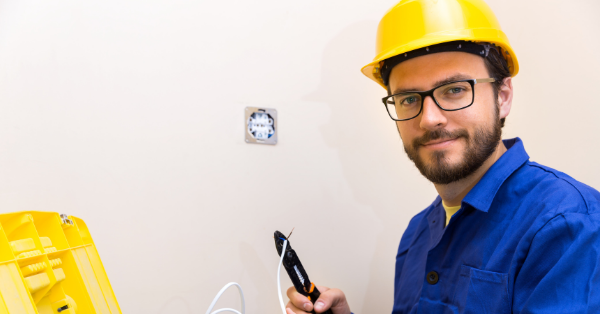 The MEAN WELL ELG series LED drivers offers a number of benefits over other models available.

Probably the most noteworthy feature of the ELG series, is the fact that they are available with a built in DALI interface.

These models are denoted with the suffix ‘DA’ in their part numbers.

MEAN WELL has always had a cost effective solution for offering DALI dimming in a rugged LED driver, but it involves using the MEAN WELL DAP-04 DALI to PWM converter.

The downside of this solution is that it requires two pieces of hardware, which means it cannot be used where space is limited, or if the LED driver is to be installed inside a luminaire. The DAP-04 also requires its own 240VAC power source.

At the time of writing, ADM has plans to stock models with other voltage outputs and we also stock a select range of the constant current models. Both of these options come with a 300mm AC input cable with bare wires, as opposed to the 1.8m Australian factory fitted flex ang plug shown above.

The above DALI dimmable LED drivers mentioned above have an IP67 ingress protection rating, which means they can be used in applications that require a weather proof LED driver.

Customers are reminded that no LED driver should be mounted in direct sunlight. This can cause the internal temperature of the LED driver to exceed the maximum temperature permissible, as stated in the data sheet. This could cause a failure that wouldn’t be covered by the warranty.

The IP67 rating is also available on the ELG models with a fixed output, and those with MEAN WELL's 3-in-1 dimming feature. Models with potentiometers that allow the output current or voltage to be trimmed have an IP65 rating.

This is because the ELG 3-in-1 dimming models feature 0-10V dimming, whereas the HLG series LED drivers have 1-10V dimming.

MEAN WELL's 3-in-1 dimming means that you can control the output of the LED driver with either 0-10V dimmers, PWM type dimmers and dimming controls that use simple resistance. This gives you a high degree of flexibility in the design of your lighting installation.

It should be noted that the MEAN WELL ELG series LED drivers are not compatible with trailing edge, nor leading edge type dimmers. For these types of dimmers you need a LED driver that has phase cut dimming.

MEAN WELL do not manufacture a constant voltage LED driver with phase cut dimming. However, ADM is a proud stockist of the Power Source PDV series phase cut dimmable LED drivers, which offer a similar level of qualiy and reliability to MEAN WELL.

Compared to the very popular MEAN WELL HLG series LED drivers, the equivalent ELG series models offer a considerable cost saving. So if you are working on a project that is price sensitive, then it is recommended you use an ELG LED driver instead of an HLG model.

To keep costs down, MEAN WELL has concentrated the range of ELG series to the most commonly used sizes. They have also re-engineered the housing, so that it more cost effective to produce but yet offers the same resilliance as the aluminium extruded body of other MEAN WELL rugged LED drivers.

The ELG series also utilises the latest components, which means less need to be used, and the latest production techniques to keep costs to the absolute minimum.

The MEAN WELL ELG series LED drivers are backed by a 5 year warranty. This is a little shorter than the 7 year warranty offered on the HLG series.

However, if you compare the MTBF (Mean Time Between Failure) data of comparible models you will often find that the ELG is more favourable:

If you have any questions at all on the MEAN WELL ELG series LED drivers, then please contact ADM. A member of our expert team will gladly answer any questions that you may have.