Selecting a LED driver with the correct forward voltage range is critical for LED luminaire designs, and when matching a constant current LED driver to a light fitting.

However, this is not always as straight forward as it seems.

Firstly, LED forward voltages are not the same from die to die, there is a tolerance that is usually specified by the manufacturer. This is why ADM recommends that you do not connect LEDs to a constant current LED driver in parallel.

Let’s say you have a constant current LED driver with a 1A output powering 5 LEDs with an input current rating of 200mA. Due to the permissible manufacturing tolerance one of the LEDs will come on once the output voltage of the LED driver reaches 9V, another will come on at 9.3V, and the others at 9.5V, 9.6V and 9.7V.

Because the first LED is on before the others it will draw a slightly higher current than it needs. The other LEDs will be slightly under powered. As the first LED is being over driven, it is quite likely that its lifespan will be reduced, and it could fail prematurely. This failure has a knock-on effect. Because there are now only four LEDs connected to the LED driver, they will all be driven with a current of 250mA. This means all 4 LEDs are now being overdriven. This will most likely result in another of the LEDs failing soon. Of course, this then means the remaining 3 LEDs are now driven with 333mA, which means it won’t be long before they too fail.

Secondly, the LED voltage varies when the junction temperature increases or decreases.

Correct operation of the LED driver is crucial to the functionality and reliability of the LED luminaire. Therefore, it is worth looking into the factors which affect the LED voltage.

To achieve the specified optical requirements, the type and the quantity of LEDs and the required driving current are decided first. Depending on certain safety considerations and/or a modular design approach, a certain number of LEDs are placed in the same string.

Once these factors have been defined, the first estimation of the LED working voltage can be made by multiplying the number of LEDs in one string by the typical forward voltage (Vforward) of a single LED.

This calculation gives a rough estimate of the operating voltage range, and together with the determined driving current can be used to work out the power output requirement of the LED driver.

However, this number is not an absolute value and will not result in a high-quality electrical design.

To accurately determine the required output voltage of the LED driver, the following attributes should be considered:

In an ideal world, the LED’s forward voltage does not change when current increases (Fig 1.). 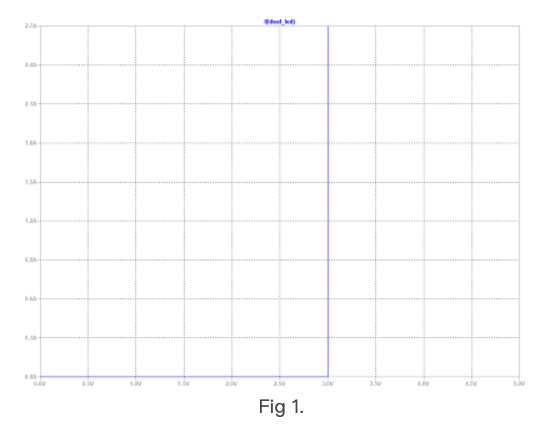 However, the forward voltage does change with current, and it is important to check the LED voltage based on the actual current drawn during use, instead of referring to the specification data obtained under standard test conditions.

In the example below, the specification shows the typical voltage of the LED is 3.2V. If LED is not used at 350mA but 1A, then instead of 3.2V/LED, the typical LED voltage becomes 3.8V/LED. This 0.6V difference could lead to a very different result when a high number of LEDs are put in series. The situation could get even worse if the LED driver has a high ripple current, which would result in a peak current higher than 1A and thus the peak voltage would exceed 3.8V (Fig 2.). 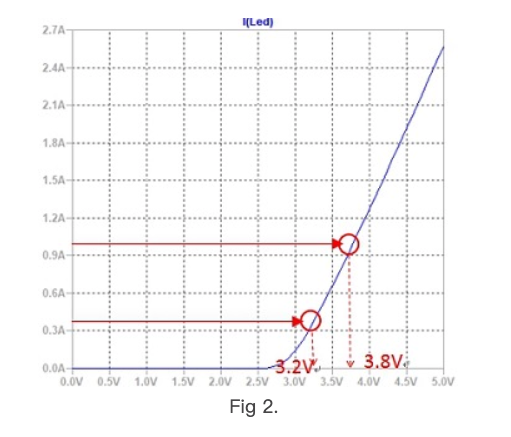 The forward voltages on each LED die have variations due to process drift.

A mature production process should provide a tighter tolerance resulting in a normal distribution (Fig. 3). 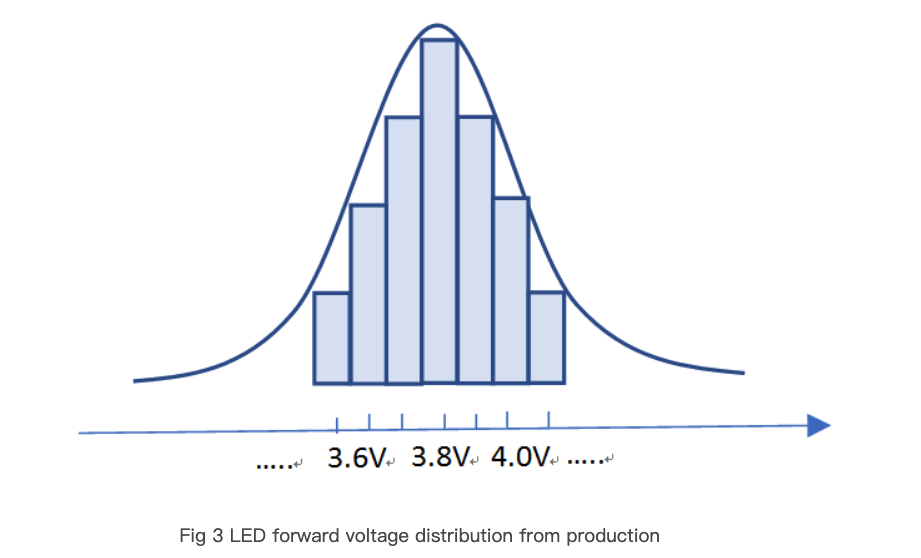 The typical voltage tolerance due to production variation is less than 10%, which can be indirectly derived from the ratio between the typical and maximum voltages published in the LED’s datasheet, such as shown in the following table:

Production data, such as actual forward voltage distribution, will most likely need to be requested from the LED manufacturer directly.
Although the absolute maximum/minimum is +/- 10%, statistically, the more LEDs connected in series, the more likely the combined forward voltage will settle around the typical voltage value.

It is recommended to create some voltage head room, a margin of 10% of the typical voltage is considered safe. However, ADM recommends a higher margin of 20%, which would ensure the LED driver is not operated beyond its limit, thus extending the lifetime of the LED driver.

An LED is a self-heating element and with good thermal design of the luminaire, the continuous working temperature and LED operating voltage should be quite stable.

The forward voltage will be at its highest when the LED luminaire starts up at a low temperature (Fig 4.). 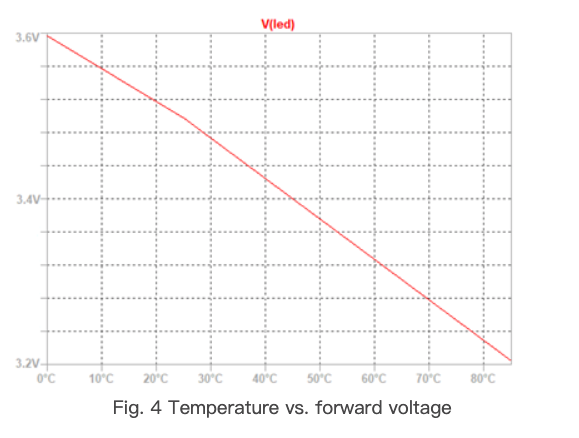 To estimate the extra voltage requirement at low temperature, the LED’s data sheet usually shows a typical V-T curve according to a standard test condition (e.g. 350mA). Many manufacturers also provide a software tool to determine the voltage according to variable parameters such as junction temperature (Tj), driving current, etc.

When low temperature causes an increase in voltage, the additional voltage requirement is only temporary, and thus the voltage head room does not need to be reserved permanently.

MEAN WELL’s HLG-480H-C, for example, has an “environment adaptive” function that can automatically reduce its output current in exchange for a higher output voltage, whilst keeping the LED driver’s total output power within the specification’s maximum power output rating. As the LED luminaire gradually warms up, the voltage falls back to a normal level and the current returns to the original specified value.

Example of How to Calculate Voltage and Select an LED Driver

There are 2 strings in total which mean each string has 50 LEDs. The lowest operating temperature according to the LED data sheet is 0°C.

There are two possible methods to define the voltage requirements:

Enter these parameters into the software provided by the manufacturer to calculate the LED operating point with margin.
You will probably need to request more detailed information from manufacturer to do this, as discussed above.

Check the LED datasheet and follow the steps below:

Check the LED V-I curve, find the voltage on the curve according to the driving current.

Multiply this voltage to the number of LEDs in one string.

Allow for the LED production tolerance by calculating the ratio between the LED’s typical and maximum voltages.

Take the temperature coefficient into consideration to evaluate the worst-case startup voltage.

The suggested LED driver for this application is the MEAN WELL HLG-480H-C2100, for the following reasons:

This is within the HLG-480H-C2100's specifications. The HLG-480H-C2100 also has very low current ripple, thus the ripple influence on the LED voltage will be negligible and change can be ignored.

At cold temperature the voltage requirement might temporarily be over 249V, which is not within the normal constant current region. However, this situation will rarely occur and can be covered by the environment adaptive function of the HLG-480H-C2100, which will allow the voltage to temporarily reach 275V by reducing the current output.

If you require assistance in selecting a suitable LED driver for your application, then contact ADM on 1300 236 467. A member of our expert team will gladly answer any questions that you may have.