The Power Source DDV series LED drivers fill a gap in our product range, as models are available with the following power outputs:

ADM carries both a 12V and 24V version of each, which means that we now have a DALI dimmable LED driver with PWM output for most applications.

Our stocked product range is as follows:

All models have a rugged metal housing and an IP66 rating, so they can be used in outdoor applications.

However, do not mount the LED driver in direct sunlight, as this could cause the temperature inside the LED driver to rise beyond its maximum rated operating temperature. As with all electronic devices, efficiency can drop in higher temperatures, so check the derating curve in the data sheet if you know the LED driver is expected to operate in a warm/hot environment.

Power Source is a trusted LED driver brand and ADM has been selling the Power Source PDV series AC phase cut dimmable LED drivers for over a year. During this period, we have had no more than 2 units returned with a fault.

Our experience has given us the same level of confidence in the Power Source brand as we have in MEAN WELL.

The DDV series LED drivers have a 5-year warranty.

For applications that require a DALI dimmable LED driver with a power output of 120 Watts or lower, we continue to offer the MEAN WELL PWM series LED drivers.

These are available with power outputs of 120 Watts, 90 Watts and 60 Watts. The models we carry are listed below:

The 60-Watt version is a recent addition from MEAN WELL and ADM received our first shipment in November 2019.

There is a difference in the markings on the global version of the MEAN WELL PWM LED drivers and the version stocked by ADM as shown in the below diagram. The ADM version shows the Australian regulatory compliance mark (RCM) in place of the US approval markings. 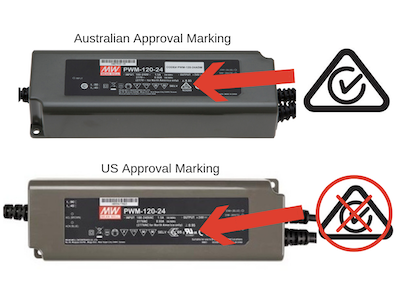 Unlike the DDV series, the PWM series LED drivers have a plastic housing. This is not UV stabilised, so it is recommended that these LED drivers are not used in an environment, where exposure to sunlight is a possibility.

The PWM series LED drivers are rated IP67, so offer a high level of water and dust ingress protection.

You may be asking why you would need a LED driver with a PWM output?

The answer is that PWM LED drivers dim evenly regardless of the load on the LED driver.

Many LED drivers, such as MEAN WELL’s HLG and ELG series dim your LEDs by varying the amplitude of the output current. This type of LED driver typically needs to be loaded to at least 90% of its maximum power rating to ensure that the dimming effect is smooth and even.

If you only had a 50% load on an HLG series dimmable LED driver nothing would happen until you had turned the dimmer down past the 50% mark, after which point the light level would suddenly drop. It would be difficult for the user to set the desired light level.