The most common problems people encounter with MEAN WELL LED drivers are that they either appear to be dead, or there is a problem with dimming the LED lights.

In the majority of cases the symptom is not being caused by the LED driver. Most problems are either environmental, or installation based. To help you troubleshoot your MEAN WELL LED driver problem, we discuss the most common causes for apparent LED driver failure.

One of the most common causes for frustration is dimming performance, especially with constant voltage LED drivers.

Most of MEAN WELL’s LED drivers effect dimming by varying the amplitude of the current output. If the driver is not loaded correctly it could lead to a phenomenon called “Dead Travel”. This is discussed in another ADM blog post, which you can read by clicking on the below link:

Troubleshooting Mismatches between a LED Driver and LED Downlights

Using a LED driver with a PWM output, such as the MEAN WELL IDLV and MEAN WELL PWM series LED drivers will eliminate the issue of dead travel. However, in some instances these may not be compatible with LED downlights.

This topic is covered in a blog post that you can read by clicking on the following link:

We are often contacted by customers who think they have a LED driver that has died. When we test them, we find out that the LED driver is functioning perfectly OK and it is the LEDs that have failed.

You need to ensure that heat can be convected away from the LED driver, so that it doesn’t exceed the stated maximum operating temperature range. MEAN WELL’s LED driver installation guide details the minimum spacing requirements for installing LED drivers, so that adequate ventilation is maintained. Use the below link to download this document:

Another thing to be aware of is the temperature derating curve in the data sheet. 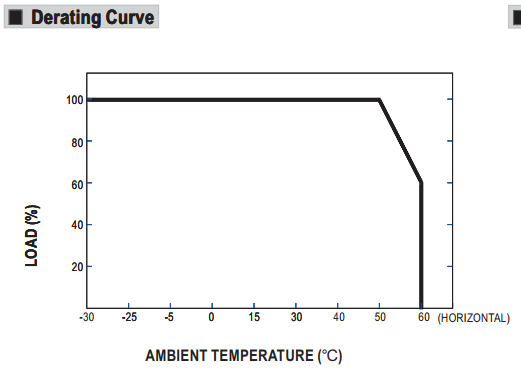 The above derating curve is taken from the MEAN WELL PLN-20 series data sheet. It shows that in an ambient temperature of 59 degrees Celsius, the load on the LED driver cannot exceed 60% of its rated maximum power output.

When operating LED drivers in higher ambient temperatures you may find that you cannot place as large a load on them as you first thought. You may have to user a larger capacity LED driver to compensate for derating.

Like all electronic devices, LED drivers lose efficiency the hotter they get. This means at higher temperatures you may need to reduce the load on the LED driver.

If the derating of the LED driver has not been taken into consideration it will be overloaded, even though the actual load may be less than the maximum power output rating shown in the LED driver’s data sheet.

Never overload a LED driver. ADM recommends allowing a head room of 20% of the LED drivers maximum rating to give yourself a buffer.

The exception to this rule is if you are using one of the MEAN WELL dimmable LED drivers that effects the dimming by varying the amplitude of the output current. Then you should aim to load the LED driver to around 90 ~ 95% of it maximum rating.

Lighting designers and installers can use ADM’s application guide to LED drivers to ensure that all factors have been taken into consideration, when selecting a LED driver for a project. This can be downloaded by following the below link:

ADM customers, who are experiencing difficulties with their MEAN WELL LED drivers can contact ADM’s support team for assistance on 1300 236 467.