Industrial applications usually call for a battery charging solution that is more robust than an everyday standalone battery charger.

MEAN WELL’s HEP-1000 harsh environment power supplies are available with a battery charging mode and the curve can be programmed to suit the battery, or batteries being used. 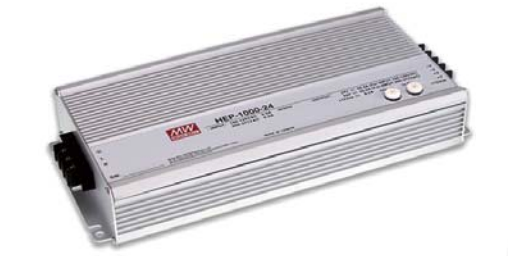 Electric vehicles and renewable energy are set to play a larger role in Australia's future, both of which are applications where this solution could be potentially used.

The growing trend for many applications is to migrate from lead acid batteries to lithium.

Lead acid batteries have been used for many years as they have a high tolerance to fluctuations in the charging voltage, can operate in a wide range of ambient temperatures (think of the batteries in electronic school signs) and have a high surge current capacity. On top of that they are highly cost effective.

The downsides of lead acid batteries are their high self-discharging rate and relatively low charge/discharge cycles, which makes them less suitable for energy storage applications.

There are a range of different lithium battery chemistries with varying different performances.

Lithium cobalt oxide (LCO) has a high energy density and is popular in personal electronics. It is also the technology that is used in many electric vehicles (EVs). Lithium iron phosphate (LiFePO4) has a longer lifetime and relatively good thermal stability making it a better option for energy storage applications.

The major concern with lithium batteries is safety. Thermal runaway could cause the battery to catch on fire. In fact, one global car manufacture is recalling 82,000 EVs globally to replace the batteries as there is a low risk of a fire breaking out.

The nominal voltage of a single lead-acid cell is about 1.8-2.3V with a recommended maximum charging current of 0.3C.

Most commercial batteries have many cells in series and parallel to form a large capacity battery at more practical voltages like 12V, 24V, and 48V. Note the 12V, 24V, or 48V is often used loosely as an indication of the voltage range. The actual voltage varies based on the remaining capacity. For example, the open-circuit voltage of a typical 12V AGM lead-acid battery is between 10.8V (30% battery capacity) to 13.8V (100% capacity). 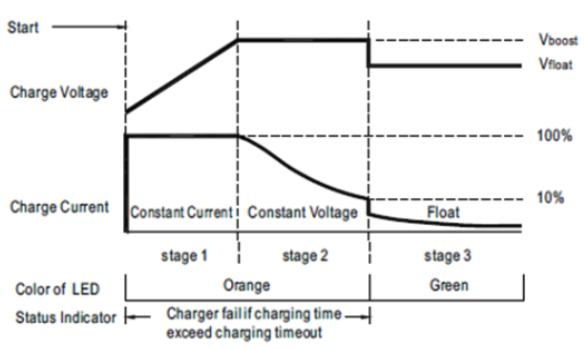 Cell imbalance is a concern for large lithium battery banks.

Due to manufacturing tolerances, the equivalent series resistance (ESR) of lithium cells cannot be matched perfectly. The differences among cells can cause cells in the same bank to be charged at a different voltage or current. The cells with a lower ESR will always be fully charged or discharged first, so those cells will age and fail faster.

The imbalance of cells not only shortens the lifetime of the battery, but it could also potentially cause thermal runaway and become a safety hazard. To solve this issue, large lithium battery banks should always be equipped with a battery management system (BMS). The basic function of a BMS is to monitor the state of charge and balance cells either passively or actively.

Passive BMS balances cells by discharging the cells with a higher charge using power resistors. It is robust and relatively easy to design, but not efficient and less effective than active balancing.

On the other hand, active BMS charges cells individually to match the states of charge. Because active BMS has charging control for each cell, some lithium battery banks with an active balancing BMS only require constant voltage AC/DC power supplies as the charger.

This is where MEAN WELL’s charging solution comes in.

As we have already mentioned, batteries of different chemistry types and from different manufacturers could have different characteristics.

It is recommended (for lead acid batteries) and mandatory (for lithium batteries) to have the charging curve optimised for brand and model of the batteries being used to ensure reliability, longevity, and safety.

MEAN WELL’s programmable chargers that can be used in conjunction with the SBP-001 smart charger programmer offer flexibility and a user-friendly interface for adjusting the charging curve. 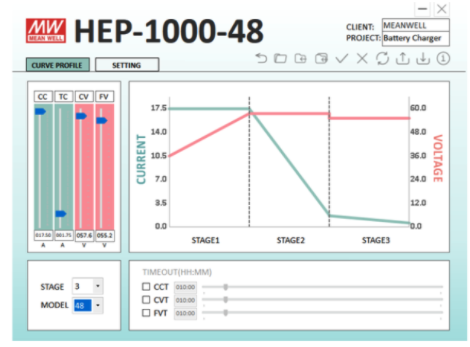 By simply selecting the 2-stage charging mode, HEP-1000-48 also can be used for charging lithium batteries with the same adjustment range.

For example, to charge a 20Ah LiFePO4 battery with a maximum charge voltage of 56V, the ‘CV’ and ‘CC’ options (shown below) can be set to 56V and 17.5A for the fastest possible charging time.  The user could lower the charging current to prevent temperature rise caused by high currents and lower the voltage to avoid the possibility of overcharging. 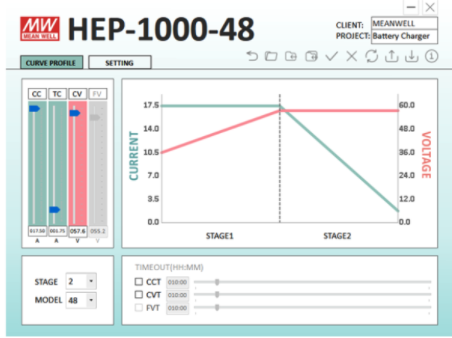 Australian electrical certification is mandatory for this type of battery charger.

However, in many OEM applications the battery charger is used as a component within a piece of finished equipment or a locked control cabinet. The HEP-1000 series battery chargers are especially designed for this type of use and are therefore considered to be a non-prescribed item, not requiring the electrical safety certificate.

MEAN WELL’s programmable chargers can be used to customise charging curves required by either lead-acid or lithium batteries.   Adjusting the charging voltage and current based on the temperature and age of the battery can preserve the battery and optimise its capacity.