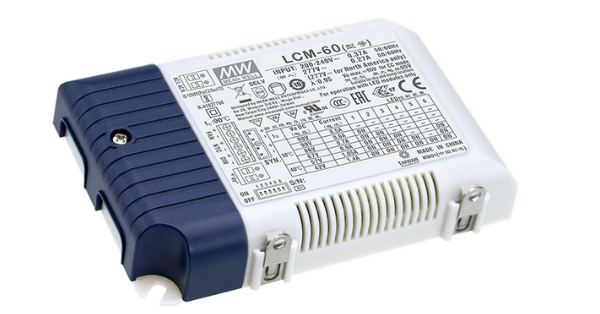 The wide output voltage range of each LED driver means that they can power just a few, or many LEDs.

If you are looking for a LED driver for use with leading edge or trailing edge dimmers, see the Power Source PDC series LED drivers mentioned later in this blog post.

MEAN WELL ’s unique 3-in-1 dimming function accepts a 0-10V input, a PWM signal, or can be dimmed by applying simple resistance. The LED driver automatically detects which type of signal your controller is using and dims accordingly.

The DALI version can be controlled directly from a DALI lighting system, or a momentary push button.

The below table shows how the LED driver will respond according to the type of input from the push button.

The LCM-25KN, LCM-40KN and LCM-60KN all have a built in KNX interface, so that dimming can be controlled by a KNX based building automation system.

You can synchronise up to 10 LCM LED drivers, with one acting as the master and the other 9 as slaves.

Due to the limited space on the product label not all of the options are displayed on the drivers themselves. The below tables show you the positions of current output options, not shown on the LED driver's label:

You can reduce your power supply stocks and maintain the ability to sell your full range of light fittings.

The LCM series LED driver is backed by a 3-year warranty.

These LED drivers are similar to the LCM series, but are AC phase cut dimmable. This means they are compatible with most trailing edge dimmers used in Australia.

Like the LCM series, the PDC series LED drivers also have a wide output voltage range, making them suitable for use with many different luminaires.