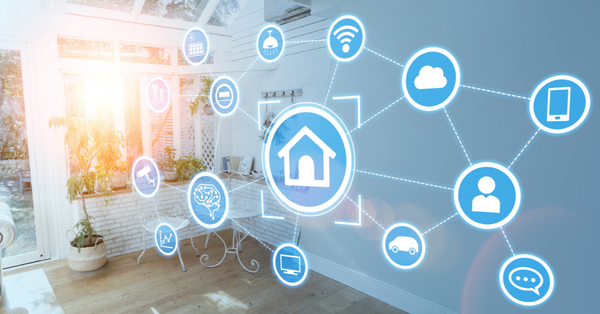 ADM offers a wide range of KNX and building automation products from reputable manufacturers such as MEAN WELL and Vimar.

There are two factors driving the demand for KNX based automation in buildings in Australia.

The World is grappling with how to reduce carbon emissions. On one side of the ledger is the method of electricity generation, and on the other reducing the rate of energy consumption.

KNX enables a high level of control to reduce energy consumption in residential and commercial buildings.

Before the introduction of KNX, building control systems tended to be complicated in terms of electrical wiring, because each type of device needed its own physical control cable as shown in the following diagram: 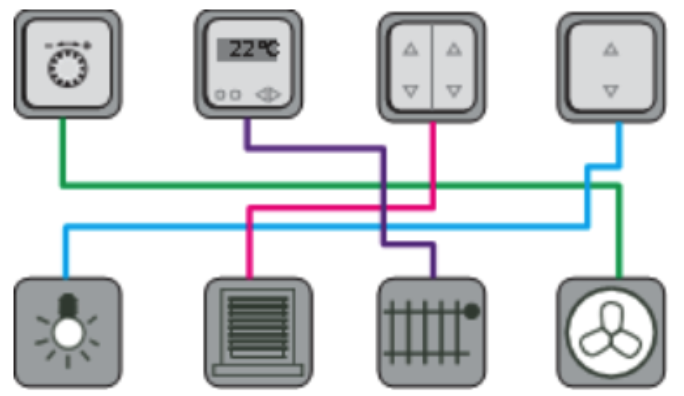 Designing and installing such a system was time consuming and expensive, prohibiting its implementation in many projects. Not to mention the additional fire risk that would needed to have been managed because of the high density of cabling.

The advantage of the KNX system is that it is a two-wire bus routed installation, transmitting the signals between devices in parallel along the 240 VAC mains wiring.

This reduces the amount of wiring required to install a building automation system. Of course, this also reduces the cost of installation and ongoing maintenance. 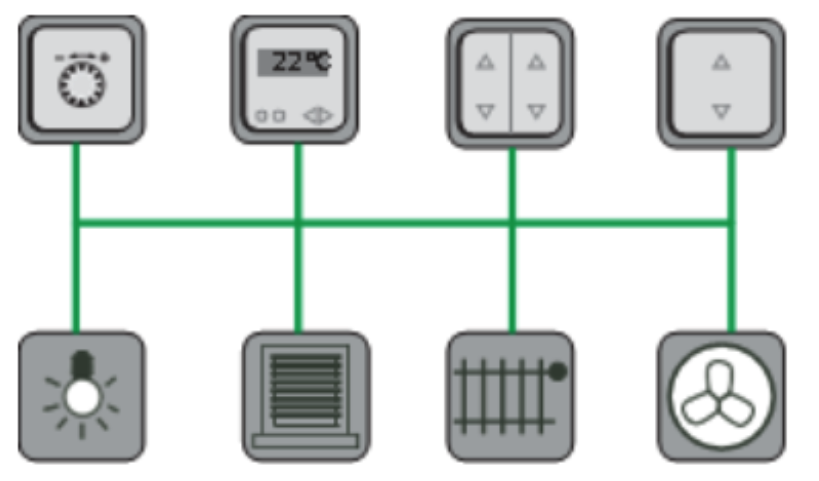 The beauty of KNX is that it is suitable for both straight forward installations, and complex projects.

Regardless of the type of installation, a dedicated KNX power supply is needed to power the KNX Bus.

A standard switch mode power supply cannot be used for this purpose. 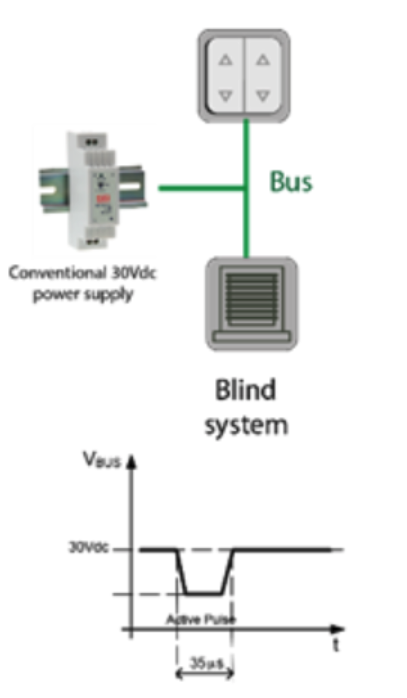 The active and equalisation pulse is then combined to generate a correct KNX signal representing “0” in the digital world. The combined waveform is finished within 104 µsec, which is equivalent to 10 kHz. This is followed with another combined waveform for “0”, or no waveform (just 30 Vdc) for “1” in the next 104 µsec.

This “0” & ”1” sequential numbering represents the actual function/command from the button to the targeted actuator of the blind system. As result, this simple KNX system can now operate properly. 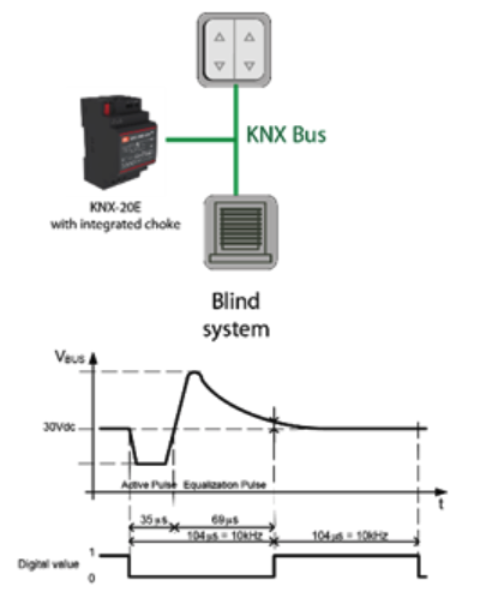 Other KNX devices, such as lighting, heating, HVAC, security...etc., work on the same principle, which means only one bus is required, allowing for a high level of design flexibility.

Each KNX device consumes 10mA from the power supply when transmitting and receiving a signal on the bus. The KNX power supply is rated 640mA, allowing up to 64 devices to be controlled on one KNX bus.

Since the launch of the KNX-20E-640, MEAN WELL has expanded its range of KNX power supplies with the introduction of the KNX-40E-1280 KNX bus power supply.

One noticeable feature of the KNX-40E-1280 is its compact size. It is only 4 SUs (72mm) wide, compared to the 6 SU width you would normally associate with other KNX power supplies with a similar power output. So, it will not take up more real estate than necessary in the distribution board.

All KNX devices including the KNX power supply, input devices, and actuators are usually installed in a distribution board within the building.

In the image below you can see a typical distribution board. The dimensions of the MEAN WELL’s KNX devices have been designed according to the standard DIN 43880. This ensures installation uniformity.

The width of the KNX device is denoted by one or multiple standard units (SU). Each single SU should not be more than 18 mm wide.

This allows more room for other KNX devices to be accommodated inside the distribution board.

MEAN WELL’s KNX actuators convert the commands received from sensors, automatic control switches or timers into actions, and form the interface between the KNX system and electrical devices such as lighting, window blinds and HVAC units.

*for more details on KNX Data Secure read our blog post: HOW KNX DATA SECURE CAN PROTECT YOUR SMART HOME OR BUILDING

The MEAN WELL actuators use high quality mechanical relays, as shown in the picture below, to turn ON or OFF any type of loads connected to them.

A decent quality relay is key to ensuring high reliability for switching actuators used in a KNX building automation system.

MEAN WELL uses relays that meet the EN60669-1 standard. This standard applies to switches for household and similar fixed electrical installations. MEAN WELL carries out rigorous testing to ensure their products exceed the requirements of this standard.

You can set various levels of regulation of the lighting, individually or in groups or use16 scenes pre-established scenes.

As well as translating the commands of the KNX system to DALI, the KDA-64 also returns the status information of the DALI devices via KNX protocol, giving you bi-directional communication.

The MEAN WELL DLC-02KN is cost-effective combined KNX DALI gateway and full master control. It incorporates a DALI bus power supply, which eliminates the need to pay for extra components.

Configuration is straightforward with easy-to-understand parameters for programming, which can be set done through the free downloadable software or a built-in web browser. Otherwise, basic parameters can be set using the buttons on the device.

ADM already has stock of units that have been upgraded with the new firmware.

The MEAN WELL KSI-01U is an interface for bidirectional connection between a PC and the KNX installation bus.

The USB connector has a galvanic separation from the KNX bus.

It can be used with standard software like ETS and EITT. Other software is handled by the FALCON driver. No additional power supply is required.

The KSI-01U supports long messages (up to 220-byte APDU length) and aides easy handling in software under operating systems not supported by the FALCON driver.

The MEAN WELL KSR-01IP and KSR-02IP IP routers allow the KNX bus to be connected to a network for programing and control purposes.

This opens up the KNX system to the world of IOT so that it can be used with third-party software and assistants.

The KSR02IP features KNX Daya Secure that encrypts telegrams to stop any potential breaches to the system.

The MEAN WELL KSC-01L is a simple line coupler that can join 2 different KNX lines.

ADM stocks a range of LED drivers from MEAN WELL that have a built-in KNX interface.

The benefit of using a LED driver with a built in KNX interface is that the need for a DALI ~ KNX gateway is eliminated. This results in a lower cost installation, by reducing the number of components required.

The MEAN WELL PWM series of constant voltage LED drivers have a PWM output for even dimming, regardless of the load on the LED driver.

They also have an IP67 ingress protection rating, so they are resistant to moisture ingress. If you wish to mount these outside, please be aware that the plastic casing is not UV stablised.

No LED driver should be mounted in direct sunlight, as this could cause the temperature inside the driver to increase beyond its maximum temperature rating. This has the potential to cause a failure, that would not be covered by the warranty.

The MEAN WELL PWM series KNX LED drivers can dim to 0.01% and have a user changeable frequency of up to 4kHz for low flicker operation for IEEE1789-2015 & EU Ecodesign Stroboscopic Visibility Measure (SVM) requirements.

All models come with a 5-year manufacturer’s warranty.

The MEAN WELL LCM series LED drivers have constant current mode output, with multiple output levels selectable via a dip switch. There are 3 models in the series:

These LED drivers are the first in the World to feature a built-in KNX interface.

All three LED drivers have an input range of 180~295VAC and selectable output current levels as detailed in the following table. Please note that the actual power output of the LED driver depends on the selected output current.

The high efficiency of these new LED drivers (up to 90%) combined with the fanless design, results in a case temperature range of -30°C ~90°C case temperature under free air convection. They also feature a push dimming interface.

The CLO (constant light output) function allows for the light intensity to remain constant over the long operating lifetime of an LED, despite the ageing of the LED chips.

The Vimar solution is modular, so there is a solution for most home and building automation applications. 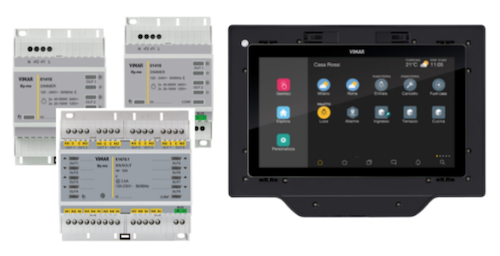 Vimar offers building automation and access solutions that can be integrated with KNX, DALI and DALI 2, communication panels and CCTV systems.

Life is made easy for installers via the View PRO software, which allows you to create a topology of the building, run diagnostics and conduct maintenance tasks.

When it comes to lighting control, you can program multiple scenarios and can control when lights turn on and off, what the light level should be, and you can also control RGBW light gear. In fact, you can even integrate a Vimar home or building automation solution with Phillips hue (hub required).

The control of gates, blinds, roller shutters, and much more can be automated with the Vimar home and automation solution.

Vimar makes life easy for the occupants with their user-friendly software, which is compatible with a KNX system.

This gives the occupant full control of the house, allowing them to control elements such as:

The system can be controlled through Google Home, Alexa, and Apple home kit.

Of course, the occupant can also access the automation system remotely, allowing them to switch lights on and off, adjust the air conditioning, access the security systems CCTV camera, etc.

Where Do You Start?

To get started, contact ADM with your application requirements. We will then look at the specifications of your project and advise you of the components that you need to achieve the desired outcome.